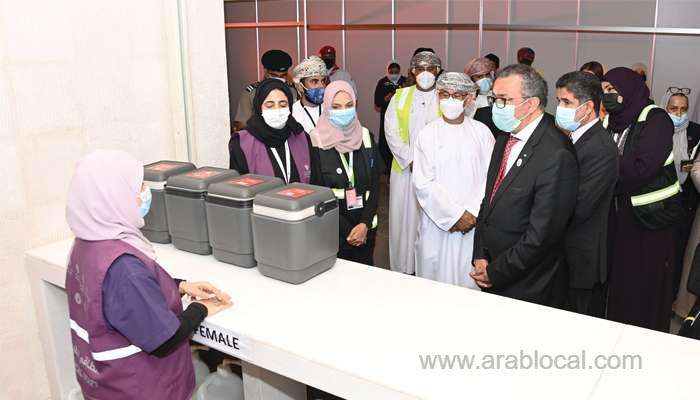 Oman’s efforts to provide COVID-19 vaccines to its people in a smooth and efficient manner have been praised by Dr Tedros Adhanom Ghebreyesus, the head of the World Health Organization.

During his visit to the country, he also visited the Oman Convention and Exhibition Centre, which is the main vaccination hub in Muscat. Millions of doses have been administered to people who visit the centre to get inoculated against COVID-19.

The director general also met the Minister of Health Dr Ahmed bin Mohammed Al Saidi, during which he praised the steps taken to fight against the spread of the virus.

“I also congratulate Oman for organizing the COVID-19 vaccination process so efficiently, and for making sure that it is a smooth experience for everyone,” he said in a statement. “I thank COVID-19 vaccinators for walking me through the vaccination process at OCEC, where more than three million doses have been received so far, to the moment when vaccines are given. I congratulate Oman for already reaching the 40 percent vaccination target.”

Ghebreyesus also expressed his delight at the considerable decline in the infection rates in Oman. Speaking to Oman TV and the Oman News Agency, he said the fall in caseloads was due to the work of the Supreme Committee, observing coronavirus precautions, and high vaccination rates against the disease.
“I would also like to share my appreciation for the fact that immunisation in Oman is linked to a person’s civil ID number,” he said, before highlighting “the streamlined flow of the immunisation process, which  takes barely 15 minutes at the OCEC.”

He also reviewed the epidemiological situation, and the plans followed to deal with the pandemic, which are carried out according to comprehensive and integrated practices among all government agencies, and enhanced by good societal awareness among citizens and residents.

Aside from being briefed on the work done to curb infection rates, which is regularly followed up on by His Majesty Sultan Haitham Bin Tarik, the WHO DG also praised the Supreme Committee for the work done during the pandemic.

The Supreme Committee’s decisions to protect the health of the country’s population from the effects of the virus are also taken in line with the recommendations of the WHO.

While commending the Sultanate’s efforts, Ghebreyesus deplored the weak global response to WHO calls to share COVID vaccines.

“This international nonchalance has become crystal clear when it comes to the distribution of coronavirus vaccines,” he explained. “Producing countries, as well as high-income countries, have garnered the greatest proportion of doses, with some booking higher quotas than they actually needed.

“I urge all countries to cooperate towards combating the disease, at least by maintaining a fair distribution of vaccines,” added the director general. “It is pointless for the citizens of some countries to get access to all sorts of vaccines, at a time when only two percent of the population in Africa is vaccinated. It does not serve global efforts to curb the spread of the virus.”

Of the one billion doses that vaccine producing countries have committed to provide, they have so far shipped 15 percent of that amount.

“Although small in proportion, this percentage is considered a positive indicator that serves the common interest and fuels international solidarity,” said Ghebreyesus.

“The WHO made it clear right from the beginning that it is highly necessary to administer the vaccines to segments at risk of infection, including health workers and certain age groups,” he explained, sharing his deep regret that some countries vaccinate people not really considered at-risk.
“This does not serve global solidarity and international efforts to combat the pandemic,” he stressed.