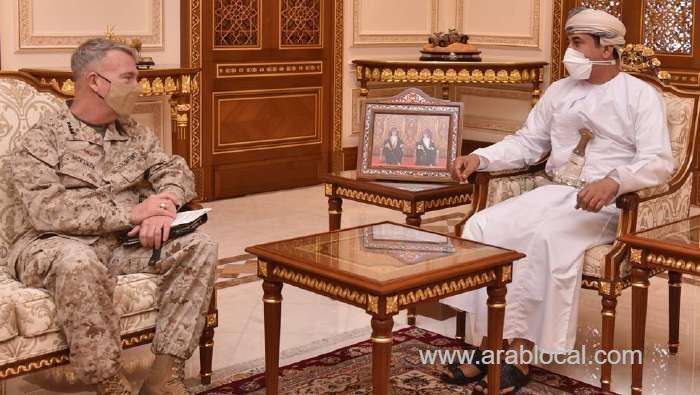 Gen. Sultan Mohammed Al Nu’mani, Minister of the Royal Office received Gen. Kenneth McKenzie, Commander of the United States Central Command and his accompanying delegation in his office on Sunday.

The guest expressed his thanks and appreciation to the Sultanate for promoting the existing cooperation with the friendly United States of America (USA).

The two sides reviewed the strong historic relations binding the two friendly countries in various spheres to achieve the joint interests. They also reviewed a range of current regional and international issues. The two sides also touched on matters of common concern.

They reviewed a range of views on several topics of common interest.

The meeting was attended by the US Ambassador to the Sultanate and the Military Attaché at the US Embassy in Muscat. Vice Admiral Abdullah Khamis Al Ra’eesi, Chief of Staff of the Sultan’s Armed Forces also met Gen. Kenneth McKenzie. The two sides exchanged views and discussed matters of common concern.

The meeting was attended by Brigadier Abdulaziz Abdullah Al-Manthri, Assistant to the Chief of Staff for Operations and Planning, the US Ambassador to the Sultanate and the Military Attaché of the US Embassy in Muscat.