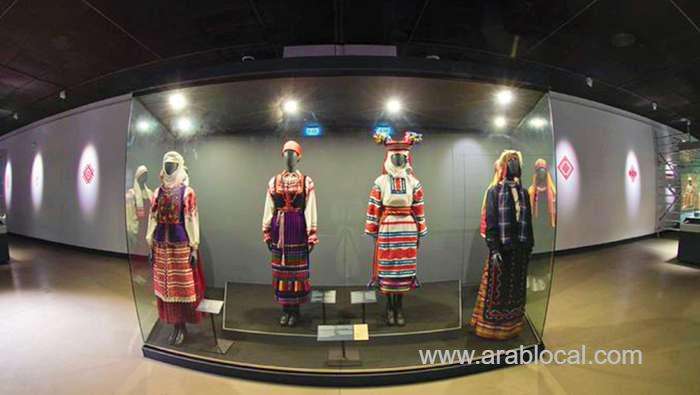 The National Museum said that it re-opened the Belarusian exhibition themed “Patterns and Symbols: A Heritage of Belarusian Ornament” and runs through till the end of April 2021.

The exhibition was opened on March 5, 2020 and closed on March 17, 2020 as per decisions of the Supreme Committee tasked with tackling developments resulting from coronavirus (COVID-19) pandemic.

This exhibition invites visitors to explore a collection of the most expressive and authentic examples of Belarusian ornamental traditions selected from the National History Museum in Minsk, Belarus.

Among the prominent displayed items is the “Rushnik” which is a craftwork towel with national ornamentation, made from cotton, linen andwoven in cross-stitchpatterns, dating back to the 20th century CE. At birth, the child is wrapped in a Rushnik and after death the same fabric covers the coffin, signifying the cyclical nature of life.

The exhibition also contains a spindle whorl; a wooden, three-pointed and notched carving and contour carving dating back to the early 20th century CE. These wooden objects on display are spindles from western Polesje, the Kamenets District of Brest Region in Belarus.

They are small and lightweight and were used to spin wool and linen. The craftspeople made these items with special care, as they were often presented as gifts to their friends and family who worked on the farms. Information, such as who the spindle was made for and who designed it, as well as the date it was made, would sometimes be found on the spindles.

There is also fork and spoon from Brest Region in Belarus. They are made from wood featuring embossed carving, and dating back to the late 19th century. Further, a plate for bread and thread represent the tableware used in every-day life. They are simple with a minimum of decorative elements.

The examples on display are engraved with floral motifs and local proverbs relating to hospitality. Decorated tableware was used on special occasions and as a display of hospitality to the guest.

The Rushnik towel also plays an important part in Belarusian feasts, as it would be used as the tablecloth, as well as the cloth lining and the bread basket. Using the Rushnik towels was a sign of generosity, as these towels were only brought out in special occasions to communicate to the guests the importance of their visit.

The exhibition also includes five-winged Polyptych icon. They were used in religious rites and found their way into various local traditions. This particular icon could be folded, as it was a travelling icon, which was taken along on long-distance travels to bless the journey. In order to protect the folded icon, the Rushnik towel was wrapped around it before storing the icon away.

The exhibition also displays Easter Eggs called (Pysanka), which is made of wood and decorated by paint. The custom of decorating eggs was associated with spring as a symbol of nature’s awakening after winter and a sign of fertility. Icon “Saint Nicholas” is also showcased. Religious icons are important during religious festivals and holidays in Belarus.

The exhibition also contains “Easter Cake Mould”, which is made of wood. This mould was used to produce the ornamental imprints on the side of the cake.

There is an outfit on display, which is designed for a Belarusian groom in the 20th century. It consists of a linen shirt and waistcoat and linen trousers. This festive costume is completed with a colourful belt with tassels. Belts are an integral part of Belarusian clothes. They were believed to give strength, protect the wearer from illnesses and bring prosperity to the future family.

The exhibition also displays Bridal Dress, which was made for a bride in the early 20th century. Compared to the dresses of unmarried women, the bridal dress is much less ornamental. In Belarusian tradition, the ornamental features of women’s dresses are connected to age and fertility. As children, little girls wear dresses with minimal embroidery. The extent of embroidery gradually increases until the age of marriage, with the young unmarried woman wearing the most ornamental clothing. After marriage and as a woman ages, the dresses become simpler, reflecting the cyclical meaning of Belarusian ornamental symbols and their connection to nature.

The exhibition is being held within the framework of memoranda of understanding signed between the Omani and Belarusian sides in 2018 in fields of culture and museums.