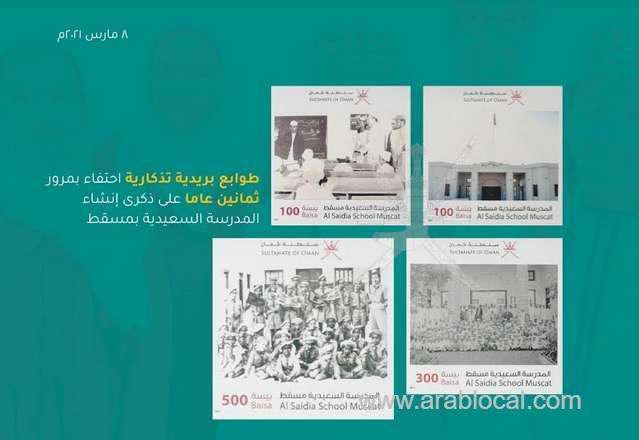 The Ministry of Education has launched commemorative stamps issued by Oman Post to celebrate the 80th anniversary of the establishment of Al-Saidia School.

A statement issued online by Ministry of Education said, "Under the patronage of His Excellency Mr. Saud bin Hilal Al Busaidi, Minister of State and Governor of Muscat, and in the presence of Her Excellency the Minister  of Education and Mr. Nasr bin Badr Al Busaidi, Director General of Customer Experience at Oman Post, the Ministry of Education launches commemorative stamps issued by Oman Post to celebrate the 80th anniversary of the establishment of Al-Saidia School in Muscat."

"Al-Saidia School was built on the orders of Sultan Said bin Taimur in 1940 and established for formal education in the Sultanate through a specialised and integrated school building."

The late Sultan Qaboos bin Said gave instructions to transform the school into a comprehensive educational museum that documents the education process in the Sultanate, to introduce the present and future generations to the stages of the educational process through successive periods of time up to the blessed Renaissance.

The museum was inaugurated in January 2014 , and it consists of ten halls that include many educational achievements under the patronage of His Majesty the Sultan, Haitham Bin Tarik.

These stamps are part of a series of commemorative stamps in denominations of 100, 300 and 500 baisa, which were printed in offset method with dimensions of 4 x 4 cm.