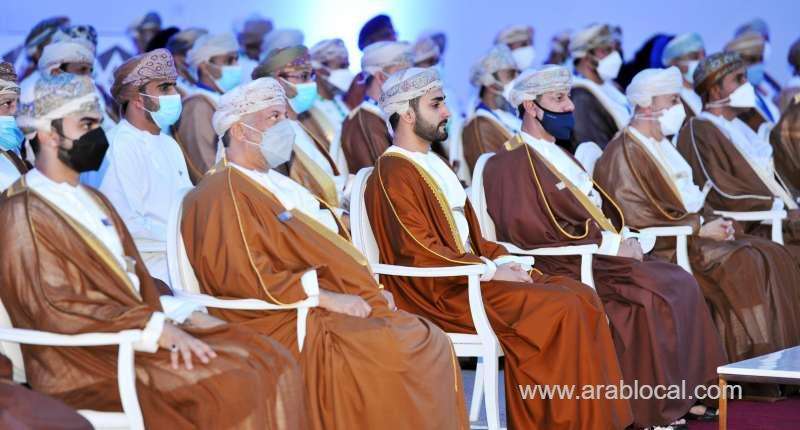 The ceremony was attended by some members of the Royal Family, ministers, undersecretaries and other dignitaries.

HH Sayyid Theyazin was given an overview of the various key components of the plant, which have been designed and built in accordance with the highest technical and safety standards. It includes an extraction facility, fractionation unit, storage tanks, shipping facilities, and a pipeline system that connects the plant with the extraction unit at the upstream end of the project, with the storage components and the export facilities located at the Port of Salalah.

The presentation to HH Sayyid Theyazin also covered the commercial operations of the plant, which has already commenced the production of LPG per international standards and specifications. The plant exported its first LPG shipment in July 2021.

The chief guest familiarized himself with the timeline for the start of production of the plant’s three main commodities: propane, butane and condensates, as well as plans to meet the LPG requirements of local citizens and residents of Dhofar Governorate via road tanker supply. Key details about the arrangements to ship customized LPG tankers for export markets were shared as well.

HH Sayyid Theyazin said: “These national projects in the petrochemical sector carried out by Oman Investment Authority through OQ Group support the national economy and reflect the aspirations of the government of His Majesty Sultan Haitham bin Tarik, towards promoting the economic diversification approaches in the country in line with Oman Vision 2040.”

“We would also like to commend the success in commissioning OQ’s LPG plant in Dhofar and its high level of operational efficiency. The plant, which is run by young Omani cadres, reflects the efforts exerted by OQ to make the optimal use of natural resources, maximize its benefits and promote the downstream industries. This will support the various economic activities related to the energy sector, particularly the small and medium enterprises” His Highness added.

OQ’s LPG plant will also meet the energy requirements of industrial and retail consumers in Dhofar Governorates. Surplus output will be exported to world markets through OQ Trading, the marketing arm of the Group. Furthermore, the Group is studying the feasibility of using LPG products to develop petrochemical industries to help optimize value creation from hydrocarbons and support downstream investment.

Speaking on the occasion, Talal bin Hamed Al Oufi, CEO of OQ Group, said: “The OQ LPG plant in Salalah is one of the most important projects of Oman Investment Authority. It will contribute to improving the gas value chain in general, providing liquefied petroleum gas and exporting the surplus production and some of its derivatives to global markets.”

Al Oufi also indicated that the LPG plant is integrated with various other facilities of OQ Group assets in Dhofar Governorate. The project was supervised by a capable Omani management team from the beginning of its design and implementation all the way to its commercial operation. The plant has since commenced production of LPG according to international standards and specifications, with the first LPG shipment exported in July 2021. OQ’s gas network supplies the project with its needs of natural gas, while multiple products are exported through OQ Trading, the trading arm of the group, o various global markets.

The CEO of OQ Group also stated that the establishment of such projects in various governorates contributes to promoting economic and social development in the different regions of the country, while advancing the growth of the industrial sector. OQ Group aims to contribute to this objective through its various investments projects conceived in line with the sustainable development goals set out in the Oman 2040 Vision, he noted.

“The project, from inception, has sought to enhance in-country value (ICV) development in the gas sector by retaining a sizable part of the expenditure within the country. Accordingly, it contributed to developing human capabilities and strengthening the national economy. The plant paid great attention to creating job opportunities and honing the skills of young Omanis. Total expenditure as part of ICV development reached more than RO 96 million. Around 300 small and medium enterprises took part in the implementation of the plant during the procurement and construction phase,” Al Oufi explained.

The project has also contributed to the development of local communities in the governorate through the implementation of a number of Corporate Social Responsibility (CSR) initiatives in the fields of education, health and the environment. Furthermore, it has helped enhance the expertise of small and medium enterprises, which have benefited from technical advisory supported provided as part of OQ’s SME development initiatives.

In line with OQ’s strong commitment to Omanisation and human capital development, two batches comprising more than 40 Omani staff were trained at the headquarters of an international company operating in the LPG field. Some employees were also sent for training and internship programmes at various international methanol and LPG plants, as well as refineries. Moreover, a number of employees took part in intensive training courses to acquire the skills necessary to operate the plant efficiently.

But the project did face its share of challenges, as have other such ventures around the world, during the Covid-19 pandemic, said Al Awfi. These difficulties, encountered during the implementation phase, were nevertheless tackled thanks to the concerted efforts of the various teams working on completing this project. As a result, OQ was able to overcome many of the logistical and technical challenges posed by the pandemic, he noted.

In his address, OQ Group’s CEO also reiterated OQ’s commitment to adhering to best practices in driving sustainability through the application of governance principles, continuous review of all the company’s activities and operations, and the development of an action plan to raise the efficiency of operational processes. OQ prioritizes performance improvement, which makes it a leader in the energy industry, he stressed.

Affirming OQ’s commitment to financial stability and sustainability, he said the company has adopted a strategy that seeks to rebalance its investment portfolio with a view to attracting foreign investments, while studying options for privatizing and exiting some assets.